After more than two months of fighting, the war continues in Ukraine. Millions of Ukrainians, including tens of thousands of Jews, have fled the country, many to Israel. Jewish Federations and our partners continue to work together to ensure that urgent relief reaches the neediest.
Skip to content
Join Federation on our Centennial Mission to Israel!
< Return to Blog Here is the latest update on the situation in Ukraine from our national and international Jewish Federation partners.

After more than two months of fighting, the war continues in Ukraine. Millions of Ukrainians, including tens of thousands of Jews, have fled the country, many to Israel. Jewish Federations and our partners continue to work together to ensure that urgent relief reaches the neediest.

The bodies of 290 civilians have been uncovered in Irpin, outside of Kyiv, since the withdrawal of Russian forces. Irpin Mayor Oleksandr Markushin said that 185 of the dead have been identified, the majority of whom were men. The cause of death was “shrapnel and gunshot wounds.”

Meanwhile the Mariupol Mayor Vadym Boichenko said that Russian forces deported almost 40,000 people from Mariupol to Russia. Russian officials claim that almost 1.1 million people have been evacuated from Ukraine to Russian territory since the war began. Of that figure, almost 200,000 are children. While Russia claims the evacuations are undertaken for humanitarian reasons, Ukrainian officials have repeatedly said that thousands of citizens are being deported to Russia forcibly. A missile hit targets in Odesa on Monday, including a church and a dormitory. Among the casualties are a 14-year-old boy killed and a 17-year-old girl wounded, according to Ukrainian President Volodymyr Zelensky.

The Ukrainian military said its forces have won back control of several towns to the north and east of Kharkiv, potentially making it more difficult for the Russians to launch missile and artillery attacks against the city.

According to media reports, US and other Western officials believe Russian President Vladimir Putin could formally declare war on Ukraine as soon as May 9, which would allow for the full mobilization of Russia’s reserve forces — which officials say Russia desperately needs amid a growing manpower shortage. May 9 is known as Russia’s “Victory Day,” marking Russia’s defeat of the Nazis in 1945.

Tensions between Israel and Russia have heated up following Russian Foreign Minister Sergey Lavrov’s remarks saying Nazi leader Adolf Hitler “had Jewish blood” and that Jews “are among the worst anti-Semites.” Lavrov made the remarks during an interview with Italian television, in which he claimed Ukrainian President Volodymyr Zelensky’s Jewishness did not undermine Russia’s claims that its invasion of Ukraine was meant to “denazify” the country.

In response, Israel’s Prime Minister Naftali Bennett said, “I view with utmost severity the Russian Foreign Minister’s statement. His words are untrue and their intentions are wrong. The aim of such lies is to blame the Jews themselves for the most terrible crimes in history that were committed against them, thus freeing from responsibility the oppressors of Israel.”

Israel’s Foreign Minister Yair Lapid went further, saying, “This is an unforgivable and scandalous comment, a terrible historical error and we expect an apology. Hitler was not of Jewish origin and the Jews did not murder themselves in the Holocaust. The lowest form of racism against Jews is blaming the Jews themselves for anti-Semitism. We are making every effort to maintain good relations with Russia, but there is a line, and this time the line has been crossed. The Russian government must apologize to us and to the Jewish people.”

Meanwhile the Israeli field hospital in Ukraine, Kohav Meir (Shining Star), has finished its operations and all volunteers have now returned to Israel after spending six weeks in the country, where they treated more than 6,000 patients. The humanitarian aid project, led by Israel’s Foreign and Health Ministries, Sheba Medical Center and other Israeli hospitals, was supported by Jewish Federations’ partner the American Jewish Joint Distribution Committee (JDC).

Israel will bestow one of its highest honors on Elizaveta Sherstuk, the woman who oversaw the rescue of 250 Ukrainian Jews from the Russian border. Sherstuk, who runs JDC’s Hesed Welfare Center in the Ukrainian city of Sumy, will light a torch to mark Israel’s Independence Day. 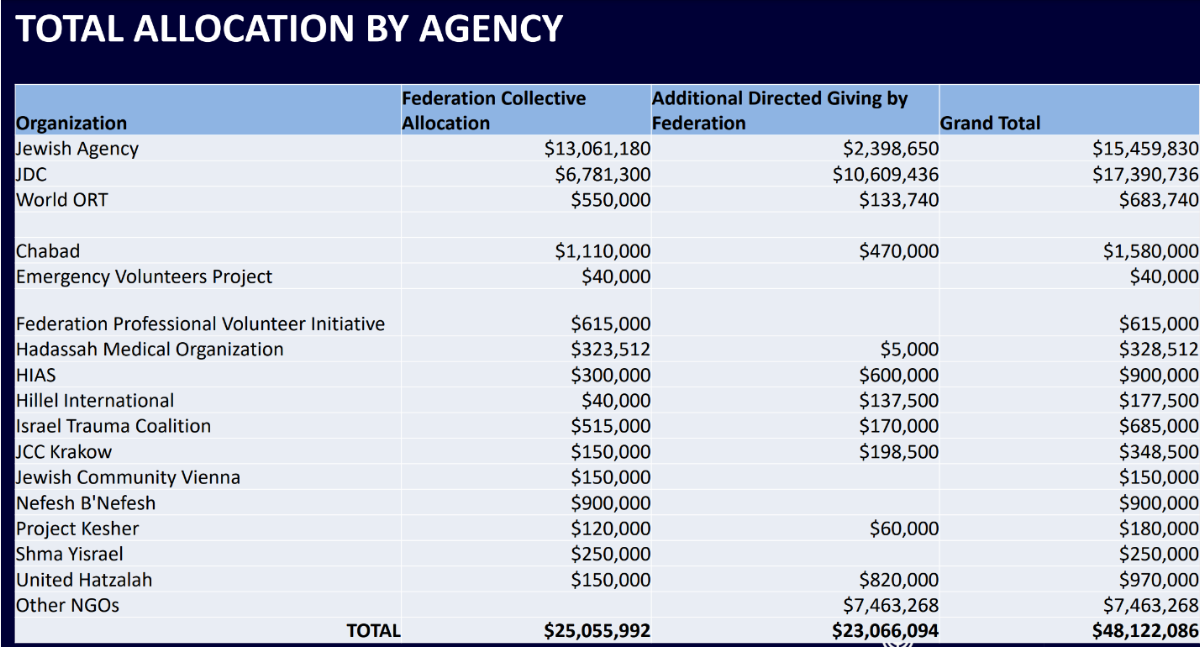 Federations have created a first-of-its-kind central volunteer hub in support of refugees fleeing Ukraine.  The first two cohorts have now returned from Poland and Hungary where they provided humanitarian assistance, aided olim in their immigration process and cared for children.  The initiative is being run in partnership with the Jewish Agency, the JDC and IsraAID.

The American Jewish Joint Distribution Committee (JDC) continues to help Jews in need across Ukraine. Since the beginning of the war, JDC has:

The Jewish Agency for Israel continues to coordinate mass relief efforts and enable Aliyah for the Jewish community in Ukraine. Ahead of Israel’s Independence Day, the Agency said that some 38,000 olim (immigrants) will celebrate their first Yom Ha’atzmaut as Israeli citizens this year. This marks a two-decade record in new immigrants making Aliyah, most of whom came due to the war in Ukraine.

Since last year’s Yom Ha’atzmaut, more than half of the immigrants arrived from Ukraine and Russia, 4,000 came from the United States, 3,700 from France, 1,000 from Belarus, 1,000 from Argentina, 700 from Great Britain, 600 from South Africa, 500 from Brazil, 400 from Canada, and other olim made Aliyah from Australia, Germany, Belgium, Chile, and Italy, among other countries.

Acting Chairman of the Executive of The Jewish Agency for Israel Yaakov Hagoel said, “Every oleh that comes to Israel contributes to the country and strengthens its character. The Jewish Agency is currently working tirelessly to rescue Ukrainian Jews and bring them to Israel, and will continue its rescue operations from anywhere in the world as part of its mission to help thousands of Jews outside of Israel realize their Zionist dream.”

Hillel, a recipient of Jewish Federations’ allocations for Ukraine relief, is assisting families in need in Ukraine. As part of their initiative, Birthright Israel alumni in Ukraine are packing and delivering dry food packages to families in need. The first batch was distributed in Odesa and the organization has a goal of assisting at least 200 families in several cities across the country.

Jewish Federations have activated our emergency protocols and are working closely with the Government of Israel and our partners to do everything in our power to support efforts that ensure the safety and well-being of the entire Jewish community in Ukraine, as well as to provide as much general humanitarian aid as we can.

With hopes for a safer situation, and gratitude for Israel’s Independence.