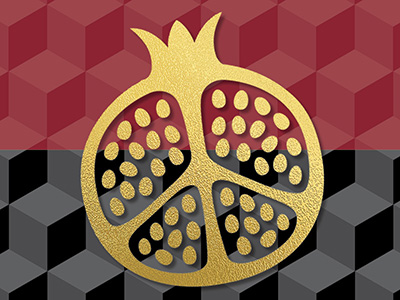 The origin of the Pomegranate:
An ancient symbol found carved into the lintels of the earliest synagogues, the pomegranate has carried with it the concepts of Judaism for generations. In the Torah, the pomegranate is one of the seven species that the spies saw in the land when they were sent forth by Moses. The Midrash tells us that the pomegranate has 613 seeds, which corresponds with the number of mitzvot or commandments found in the Torah. The pomegranate has been woven into ancient fabrics and hammered into ceremonial silver and gold objects. The intricate covers for the handles of the Torah scrolls are called rimonim or pomegranates.

In 1981, the women of Allentown, Pennsylvania, introduced the Pomegranate pin as a way to inspire giving from women of all stations. Modeled after the Lion of Judah program, the women felt that a pin at the mid level would forecast a continued commitment to Jewish life. Three decades after its inception, more than 7,000 pins have been distributed across North America.

To qualify for the Pomegranate pin, a woman donates $1,800 or more to Jewish Federation’s UJA Annual Campaign.

More than a beautiful piece of jewelry, the Pomegranate pin is a symbol of a woman’s commitment to and compassion for the Jewish people. The program represents the best of what Federation does – bringing together like-minded donors to do a world of good. Pomegranate women will share a special connection with Jewish life for years to come. For more information click here.