Like many in our community, I’ve been watching the French elections with fascination. I’m reading everything I can about the candidates and the election climate, the spillover into the rest of Europe, and more. And, because, well, it’s me, I’m fascinated by the Jewish angle. Is there a difference between how the different generations face the challenge? Is it just that younger Jews just want to leave? How much of this is new?

I’m also wondering what could happen to the rest of the community if only the strong leave? If only the weak and the vulnerable are left, will they need more and more assistance? We saw something like this, in some areas, in the collapsing Soviet Union in the late ‘80s and early ‘90s. And to this day we’re left with a charge to provide food, medicine, and homecare to those left behind.

I was in France last year, visiting the incredible programs that our Jewish Federation supports through one of our key international partners, the Jewish Agency. And one discussion still stays with me from that visit, and seems relevant for what’s happening there now.
I met with a panel of school kids in the suburb city of Sarcelles – mostly 11th and 12th graders – and we talked about their future in France. Every single one said, when asked, “There’s no future here.” All these kids were born in France, even though nearly all are also second or third generation descendants of North African Jews. That’s pretty much the story of the Jews of Sarcelles (and many of the Jews of France).

They’re neither highly optimistic nor pessimistic regarding the future of the community.
I wrote down one phrase, because it struck me. It was a young woman, who said, “Usually one says, when I look around me, at my life in Sarcelles, then I feel that my situation is good, it’s a good surroundings and we’re ok.  But when you see the news, or you think about the other Jews in France, you feel that the future here isn’t so clear.” 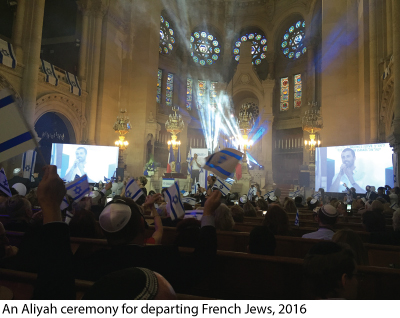 When I asked the kids where they thought they’d be in ten years’ time, what was most interesting (to me, at least) was less the actual answers and more the unease and discomfort in having to actually articulate an answer.  “Why are you asking? How do you want me to answer?” Or “First, you have to understand something…” or “That, I can’t predict.”

There’s tremendous insecurity. I don’t think it’s our role alone to provide the answers. But we have partners that represent our values on the ground, that show that when we talk about global Jewish responsibility we mean what we say and we say what we mean.

What happens over the next few weeks in France will have a ripple effect throughout Europe. I’m glad that Federation partners on the ground work with the Jewish community – as we do in some 70 countries around the world, and here at home – on safety, security, resilience and identity.