This is not a Jewish story. 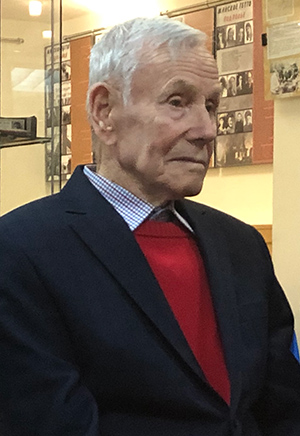 And it’s been on my mind since my recent trip to Minsk, the capital of Belarus, where I had coffee with Viktor Alekseyevich. Viktor is not Jewish. He was born in 1928 in a small village some 60 miles from Minsk. His mother died when he was two, leaving his father with six young children. And just a few months after the Nazis invaded, Victor’s father was betrayed by a neighbor and executed for supporting the partisans.

Imagine how you would feel, at 12 years old, suddenly orphaned. Three of the sisters were grown and had moved away. So there were three children left at home to fend for themselves: Anna (16), Valentina (13), and Viktor (12).

He cries as he tells the story.

A Jewish mother, Mariya Ephstein, and her daughter, Raya, escaped from the Borisov Ghetto. Their family was in a forced-march column and were going to be shot. A local policeman said to Mariya, we’re going to start shooting all you Jews once we get to the forest.

Mariya’s husband and two other children were killed. She and Raya got away. They came to the village and went from door to door, but no one would open for them. All the locals were too afraid to help Jews. But Viktor’s sister Anna told them to come in.

And for three years they hid them in the house. Mariya sewed and knitted clothes. Viktor was told by his sisters that he could no longer go to school, so he plowed the fields and grew vegetables. All the children were on duty – when they saw Nazis coming they hid Mariya and Raya, who was just a baby and only spoke Yiddish. The Nazi headquarters was slightly more than a mile away, so German troops would often come by for eggs or food, not knowing that two Jews were hiding in the house.

Yad Vashem has recognized Viktor, Anna, and Valentina as Righteous Among the Nations.

Likewise, our Jewish Federation local partner on the ground, the American Jewish Joint Distribution Committee (JDC), recognizes our debt to the Righteous. These brave people receive food, medicine, and home care, and a connection to our Jewish community that will always be grateful and indebted.

Meeting Viktor, hearing his story, reminded me of the absolute goodness that can prevail in a time of evil. I was deeply grateful to meet him.

And I’m so proud to represent our Jewish Federation, which maintains this critical program to support the surviving Righteous Among the Nations as an expression of our gratitude and values.

To see a video about my recent trip to Minsk, click here.

To read an article about the trip in the New Jersey Jewish News, click here.

Here is a selection of photos from the trip: