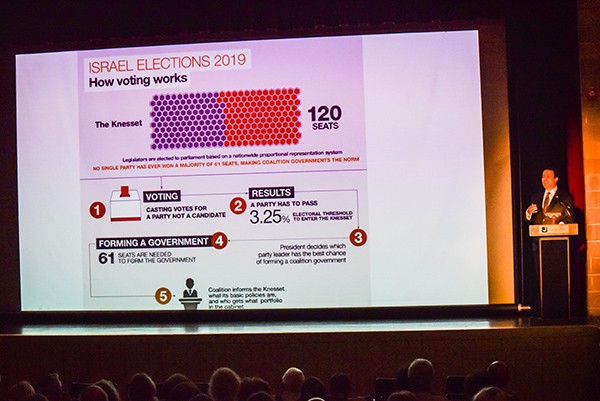 I spoke last week at the JCC MetroWest about Israel, the upcoming elections tomorrow, Israeli society, and what to expect in the coming week (and weeks...). Here’s the gist of what I said:

Israel has proportional representation voting. Legislators are elected to parliament based on percentages in a nationwide single-constituency system. And no single party has ever won a majority of 61 seats in the 120-seat Knesset. So, you get coalition governments because voters cast their votes for a party, not for a candidate. There’s also a 3.25% minimum electoral threshold to weed out the really tiny parties.

On May 30 this year, the Knesset dissolved itself just a month after it was sworn in, making its parliamentary term the shortest in Israel’s history. This year will be the first ever with two election days – the first they held in April and the second is tomorrow. Prime Minister Netanyahu needed the support of 61 members of the Knesset to form a ruling coalition. He thought he had 65, but only 60 were willing to join. No other party was even close to getting this number of supporters.

Trying for a new parliament is the obvious, if unhappy, solution. Tomorrow’s “do-over” election should mean one of two things. Either more people will vote for a coalition led by Netanyahu or more people will vote for a coalition led by someone else. According to the current polls, neither is likely to happen. The coalition Netanyahu wants to have is the same one he’s always relied on, with his Likud party at the helm and right-wing and religious parties as allies. This constellation of parties isn’t expected to get more than 61 seats. But neither does the coalition of those wanting to unseat Mr. Netanyahu have a realistic path to forming a government.

For now, no one is convincing voters to move from one political bloc to the other. Right-wing voters are staying on the right, centrists and leftists are staying on the center-left. No one seems to be able to break the stalemate. And the elections are tomorrow. We’ll be watching closely. But no matter who wins (or loses) tomorrow, remember this: Our work continues! On Wednesday, we’ll still be working with our partners and partnerships on the ground. We’ll still be helping vulnerable Israelis with food support; we’ll still be working with amazing Israeli organizations to help the disabled, the elderly, kids-at-risk, new immigrants. We’ll still work for our values and principles.

At the end of my presentation I said this:

We’re going to have disagreements on Israeli politics tomorrow, and the day after. Like we do here on American politics. And that’s ok. But we need to be respectful and tolerant when we do so.

Second, I said, we’re all learning. No one possesses absolute truth. Let’s be aware of that.

Third, we’re respectful of the democratic process in Israel, although we recognize that democracy isn’t just majority rule.

And finally, we represent a Federation with major investments and commitments to Israel’s security, society, and people. We deserve to speak our minds and we shouldn’t be shy about it. We love Israel — #WeLiveIsrael — and that means that American Jews, even if we may not necessarily have a vote, certainly have a voice.

And if you’re around the Federation main campus tomorrow early afternoon, you’ll find a bunch of us watching Israeli tv news live in the upstairs lobby. Please join us. Snacks may be part of the deal too.