After all the excuses, we stood at the Wall. The two of us. And we prayed.

My colleague Naomi Adler, the CEO of the Jewish Federation of Greater Philadelphia, and I were at the Board of Governors of the Jewish Agency for Israel. Like our colleagues in Philadelphia, our Jewish Federation of Greater MetroWest is a major funder and supporter of the critical work that the Jewish Agency implements on our behalf. The stuff that really makes you proud when you read about our Jewish response – helping Jews from crisis-stricken areas make Aliyah (move to Israel), bringing younger Jews to Israel on the amazing year-long MASA program, supporting our (and other) lone soldiers in the IDF, and partnering with Israelis on meaningful programs that enrich lives and create deep connections. Stuff that swells your heart with pride that a Jewish community cares for those in need, builds Jewish life, and saves the world, one person at a time.

And these past years, the Jewish Agency has been a key supporter in our Federation’s struggle for religious pluralism in Israel.

Religious pluralism isn’t a fancy buzzword. It has real-world consequences and implications. It means that American Jewish values of diversity, of mutual respect, and of tolerance should be upheld. It means that you must say what you mean and mean what you say. And it also means that you need to be aware of the power of your words. That as we remember the assassination of Prime Minister Yitzhak Rabin, z”l, we have to hear the Sephardic Chief Rabbi of Israel say that Reform Jews are worse than Holocaust deniers. That while Prime Minister Netanyahu reiterates that all Jews have a place at the Kotel, we have to hear the Israeli Health Minister say that “Reform Judaism has no access to or recognition at the Western Wall.”

The promises that were made after four years of negotiations over equal access to the Kotel were broken. Negotiations had been held in good faith with the religious streams and the Jewish Federations with the Government of Israel. But an agreement that was fair, and based on compromises by all sides, was thrown away at the end of June by coalition politics and a willingness, after all these years of saying that “we are One,” to admit that sometimes we are a fractured Many.

You can try to explain that this is how politics in Israel work, that we shouldn’t be so naïve, and that American Jews should all make Aliyah if they want to change the system. That would be a (more) valid argument, perhaps, if we were discussing the draft, or taxes, or other major social issues. Some things should be decided by those who live there and pay the burdens of taxes and army service and daily life. But the Kotel is different.

You can tell me that most Israelis don’t care about the Kotel. It may be true (but it may not – most opinion polls show that most Israelis oppose the politicized Haredi monopoly over the site) but even if it is, would you use that argument consistently about your own core beliefs? I doubt it. The people that I’ve heard using that argument most these past few months have used it as a weapon of intolerance rather than a statement of fact. They’re saying Drop it. Your views and feelings and values aren’t really important anyway.

We achieved an agreement – on recognition, on visibility, on space, on governance. And in a cynical act of betrayal, it was thrown away.

There’s more for us to do here. Our Jewish Federation funds hundreds of thousands of dollars’ worth of pluralism programs and platforms and initiatives every year. Our Religious Pluralism Committee not only allocates money to these worthy programs but is also works tirelessly to educate our community on the importance of advancing religious pluralism and diversity in Israel. Last month, our Federation became the first to join a group of rabbis, leaders, and cultural figures to sign a statement calling for major changes to ensure Israel’s identity as a Jewish and democratic country.

The other day I went to visit our flagship program, Reshut HaRabim, which brings together more than 30 Orthodox, Reform, Conservative, and unaffiliated organizations in Jerusalem for planning, programming and advocacy. These kinds of networks reflect a multitude of perspectives and religious expressions, and they’re changing Israeli society as we speak.

But that’s not the Kotel. And we may yet need to dial up the pressure and really say what we mean… and mean what we say. We may now need to look at advocacy programs, and lobbying, and pressure – and telling the truth to political leaders who claim to love us but won’t take our values and identity seriously. 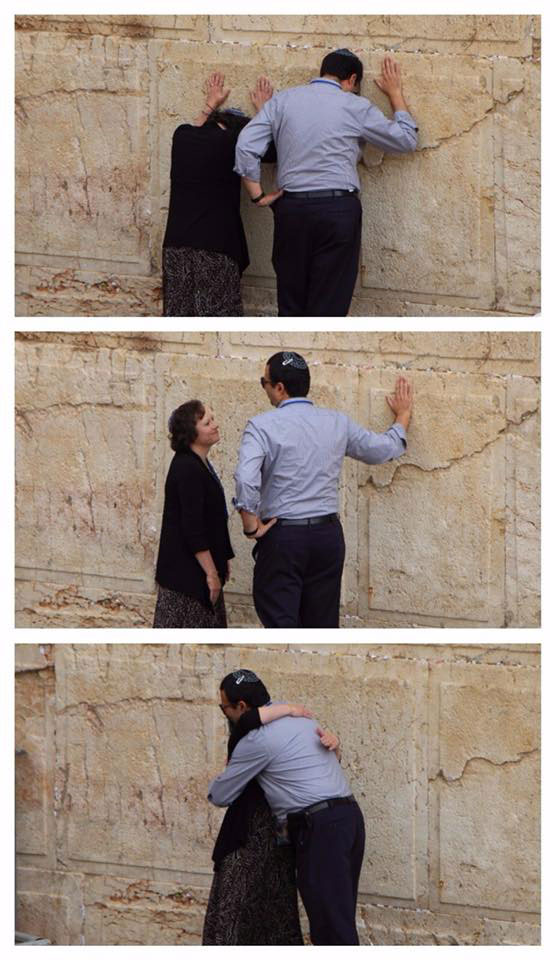 We left that meeting, and the same excuses we’ve heard before. And we walked over and touched the actual wall itself.

And together, standing next to each other, at the wall, we prayed for Justice, and Peace, and Love and Respect.

We prayed for Dialogue and Understanding and Tolerance.
And we prayed for the unity of the Jewish People.