This is the story of our P2G Arad Renewal Process that took the relationship between Greater MetroWest and Arad, Israel, a city located in the Negev, to new heights. Arad is our newest partnership community in Israel with wonderful opportunities to develop living bridge programs that will impact both communities positively. 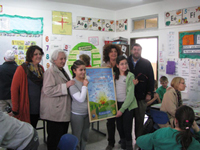 Arad is located on the border of the Negev and Judean Deserts, near the Dead Sea. The city is home to a diverse population of about 28,000 people that includes Ashkenazim and Sephardim, secular and religious, Russians, Ethiopians, and Bedouins, as well as native-born Israelis. The Tamar region encompasses communal villages, agriculture, factories, tourist sites, and military and civilian installations. The Tamar Council has a permanent population of 2,300.

The New Jersey/Delaware-Arad/Tamar Partnership (P2G) encourages and fosters enduring relationships between and among Jewish communities by funding an array of programs locally and in Israel that all have a “living bridge” component connecting the two.

Areas of funding include the environment and education; economic development and population growth; arts and culture; talented youth; and programs that connect Arad/Tamar and New Jersey/Delaware. Examples include. 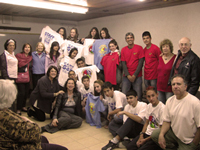