We are all connected. That’s why I went to Puerto Rico last week with seven other Greater MetroWest community leaders. Yes, it was going to be a whole lot warmer than in New Jersey. And yes, we were going to get to see Lin-Manuel Miranda in Hamilton. But we went because there is a Jewish community in Puerto Rico that needs to feel connected. It was an amazing opportunity to see the difference that a small number of people can make when they are determined to engage in tikkun olam, repairing the world. 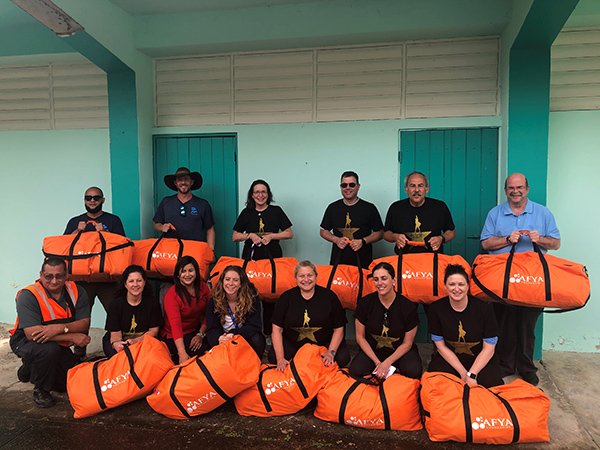 And we can each do one thing to aid in that repair of the world, like the man in the fable, walking a beach covered in starfish after a storm. He casts one starfish at a time back into the sea. He might not get to all of them, but it makes a huge difference to each one he saves. So even before we left, we did one thing. We each brought duffels of medical supplies as our luggage, through the Luggage for Life program run by the AFYA Foundation. At the cost of $150 a duffel, each one can make a huge difference in isolated areas. We brought a total of eleven duffels among 8 participants.

We were on the ground in Puerto Rico for roughly 60 hours. While there, Talk Less, Do More was our motto. In retrospect, it’s hard to believe we packed so much into such a short time.

I serve as the chair of the Network of Independent Communities of the Jewish Federations of North America (JFNA). These are the Jewish communities that are too small to maintain local agencies such as JCCs or Jewish social service agencies, but that still are committed to giving to the collective UJA system. Puerto Rico is one of these Network communities, so the experience of going to Puerto Rico representing The Network as well as my home federation was priceless. We were accompanied by Ed Finkel, the regional director for the Network, who has worked tirelessly with the Puerto Rico Jewish community for years. Ed was our expert and scholar-in-residence, and he is also a member of the Greater MetroWest family.

We first worked with a team of amazing young volunteers from NECHAMA, an American-based Jewish organization that responds to disasters in the United States. Eighteen months after the hurricane, they are still focused on repairing homes, and specifically the roofs, still covered in blue tarps across the island. We were assigned to the home of Olga, her daughter Bebe, and Bebe’s son, the family of an American war veteran, in Catanas, a small suburb of San Juan. The cement roof of their one-story home has many leaks, leaving the dining room and living room unusable and requiring they sleep with tarps hanging from the ceiling in all the bedrooms. 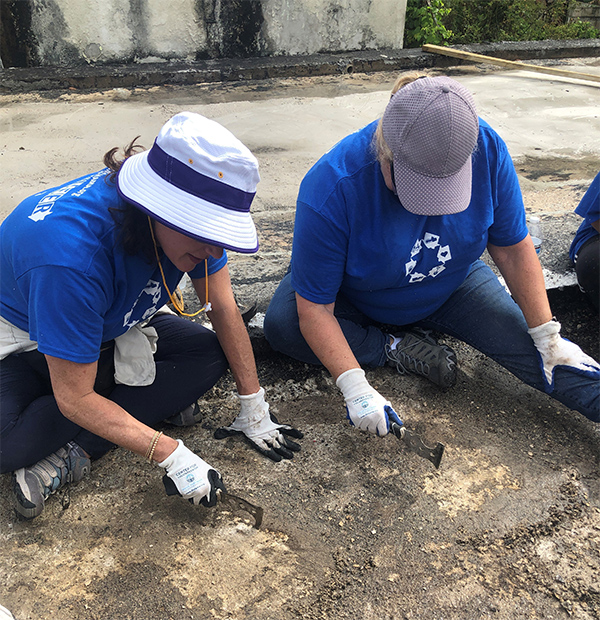 Over time, leaks in the cement roof had been poorly repaired with various materials, including tar, plastic filler and adhesive paper. Our assignment was to remove as much of these materials as possible, to uncover the cracks so they could be repaired properly. With scrapers, chisels, and hammers in hand, we set to work as a light rain fell. By the end of our shift, the roof was mostly cleared and Krystal, the NECHAMA coordinator who led our little crew, told us the work on this house would be completed within the week. This was only one of 50 houses in that neighborhood on NECHAMA’s repair list, but we made a difference.

We spent the next day learning about the needs in the countryside, heading south out of San Juan to Patillas, a small community that was entirely cut off after Hurricane Maria. They had no electricity or clean water for over six months, and still had no cell service. For those of us who went two weeks without electricity during Hurricane Sandy, six months is unimaginable, and the concept of no clean water even more so. We went to Patillas with IsraAID, an Israeli NGO that works in disaster relief, both short- and long-term, around the world. IsraAID’s work in Puerto Rico is funded in part from a grant from the Emergency Relief Fund administered by the JFNA, with dollars from all the federations, including ours. When we opened our online “mailbox” for Hurricane Maria relief, this is one of the places your dollars went. IsraAID’s work in Puerto Rico is life-saving, life-changing, and inspirational.

Immediately after the hurricane, IsraAID distributed home use water filters in El Real, a village of about 1,400 people that is not connected to the Puerto Rican water system. They relied on an electric water pump which was useless after the storm. Water filters were a short-term solution which helped the residents to trust the people from IsraAID. Since then they’ve nearly completed their long-term solution, the organization’s largest capital project yet, anywhere, and funded through the JFNA Emergency Relief Fund and the Chicago Jewish United Fund (Chicago’s Jewish Federation): a slow-sand, gravity-based water filtration system that will allow the El Real community members to access clean water from their homes, without relying on electricity. It will also create jobs not only for maintenance of the system but also for the monitoring and charging for usage.

In addition, IsraAID worked with volunteers from the Puerto Rican Jewish community to develop an educational program about the Water Safety and Hygiene (WASH) initiative. This project is a special way to show that Jews and Israelis care about their non-Jewish neighbors and to build interfaith bridges. And IsraAID has trained 60 teachers who work with youth at risk in stress management techniques to deal with PTSD after the hurricane. As one teacher told us, “This really isn’t post-traumatic stress – these kids are still living with trauma every day,” as reliable electricity and clean water are still in short supply.

The Clinton Global Initiative recently recognized IsraAID for its work in Puerto Rico. It is so inspiring to see young people, like those we met on our trip, living out their Jewish values by devoting themselves to repairing the world with such tangible results. 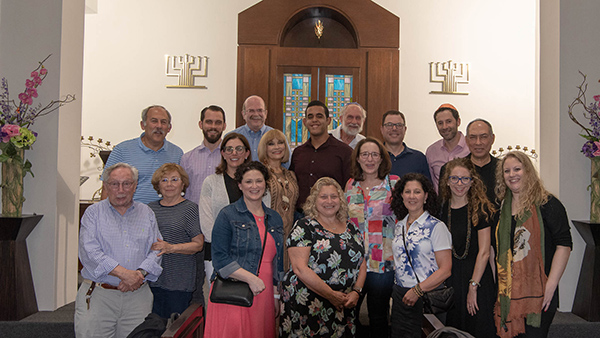 That evening we visited Temple Beth Shalom, located in the heart of the Condado section of San Juan, for dinner and a tour of their synagogue. Shortly after the hurricane, our Federation Board of Trustees allocated $10,000 from our Emergency Fund for the synagogue to purchase and install solar energy panels. The congregation was extremely grateful for the funds, and to know that the mainland Jewish community had not forgotten them. This Reform congregation is newly invigorated with Jews by choice, many of whom have stories from grandparents of hidden Jewish traditions carried down through generations. The congregation is served by a rotation of visiting rabbis, including Greater MetroWest’s own Rabbi Norman Patz, who served for many years at Temple Shalom of West Essex. Rabbi Patz and his artist-activist-playwright wife Naomi were in Puerto Rico when Hurricane Maria hit. They shared with us the stories of the devastation they saw, the damage from rain and wind to the synagogue, and how isolated they and their congregants felt. 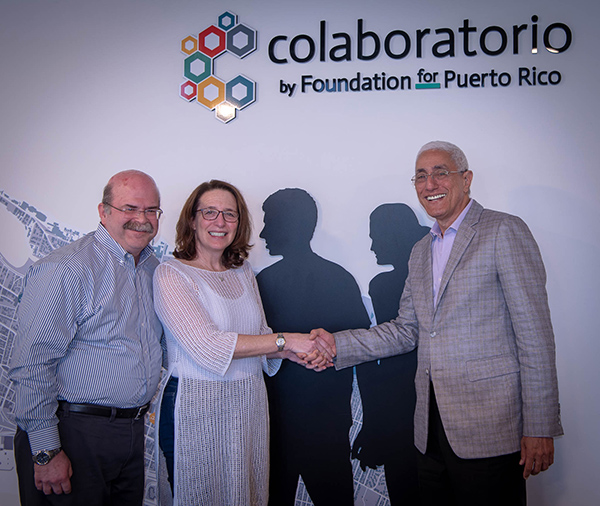 On our final day we visited a very moving Holocaust memorial with Rabbi Patz, built opposite the Puerto Rican capitol building on land given by the government. We could feel the determination of the Jewish community of Puerto Rico and the government to zachor, to remember and to never forget. From the memorial, we had a look into Puerto Rico’s future, with Jon Borschow, the founder and chair of the Foundation for Puerto Rico and a leading member of the Puerto Rican Jewish community. We visited him at the Foundation’s offices in a hurricane-resistant building that housed more than 200 companies and not for profits in the immediate aftermath of Hurricane Maria. It is a light-filled, modern space that is used as a “WeWork” hub for many of Puerto Rico’s not for profit organizations. Jon and his team are committed to a bright economic future for Puerto Rico.

Our final stop was at the beautiful new Chabad House where Rabbi Mendel Zarchi and his wife Rochi gave us a tour of their building. They described how they, their children, and members of the community sheltered there during Maria. They huddled in a large storage closet during the last few hours of the storm, as the wind pounded the building. Rabbi Zarchi reminded us that the word adam (Hebrew for man) has no plural. When we act together and demonstrate love for our fellow man, he said, we are one.

When I think about all the extraordinary people we met in the course of our short time in Puerto Rico, I can see how their decisions to take action might have started with one simple step, but these individual acts combine to bring repair to Puerto Rico and to the world. It was a privilege to encounter them, to work with them, and, in some small way, to make a difference ourselves.