By Julie Blackman and Diane Lavenda

We want to re-acquaint ourselves with non-Jews. Somehow, over the years, the diversity of our friendships has narrowed. We want to open the silo doors and begin an interfaith conversation.

In early 2019, we (Julie, a social psychologist, and Diane, a corporate lawyer, both contemplating retirement and both members of Temple Ner Tamid in Bloomfield) raised this idea in conversations with Linda Scherzer, the Director of the Community Relations Committee (CRC) at Jewish Federation of Greater MetroWest NJ. Linda was immediately enthusiastic and recommended that we begin with women. Thus, at a time when episodes of anti-Semitism ran high and racial and religious divides loomed large, the idea for the Interfaith Women’s Conversation (IWC) was born. 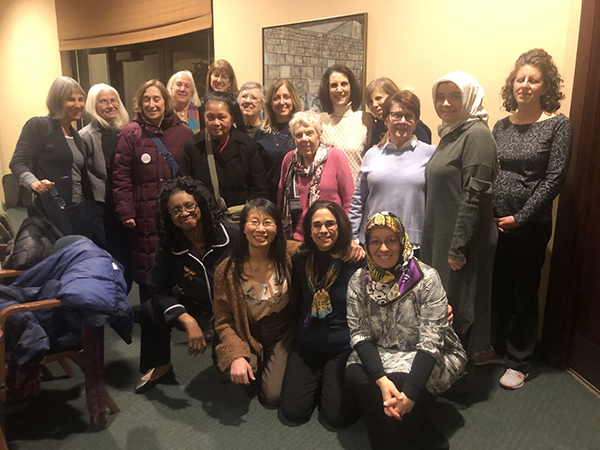 We got underway quickly, recruiting members with deliberate attention to non-Jewish religious organizations. At our first meeting on June 25, 2019, about 15 women from Union Congregational Church graced our meeting room at Temple Ner Tamid, along with a few women from other neighborhood churches. Only four of us were Jewish at that first meeting – Mandi Perlmutter and Linda from Federation and the two of us. We introduced ourselves and began to create our mission together. There was no pre-existing agenda beyond the name of our group. Julie quoted Pocahantas (of Disney fame in this context), who sings “The Color of the Wind,” and promises that, if you listen, “you will learn things you never knew you never knew.” We were all about to learn things we never knew we never knew.

Our second meeting took place the following month and we were joined by a number of Turkish Muslim women from an organization called Peace Island. The thrill of the opportunity to sit around a table together and share our experiences was nearly tangible. We were all excited to talk with one another about our religious practices, holidays, and prayers. We began a tradition of having one of our members open our meetings with a prayer. Together we decided what questions we would discuss at the next meeting. We took notes at each meeting so that we would be able to trace our evolving path.

We’ve discussed religious holidays and how we observed them. We learned that the fasting during the month of Ramadan, when Muslims do not eat between dawn and sunset, is intended to teach empathy and to foster insight into what it means to be hungry, and to encourage acts of compassion. We learned about the church services that attend Easter and the story of Jesus’ resurrection. And we discussed Passover, the Seder meal and what it symbolizes.

We’ve also discussed our views of intermarriage and talked about the best and the hardest things about practicing our religions in the United States today. We learned that Muslims and Jews share many views on these topics; Protestants were more tolerant of intermarriage and had less to say about religion-related hardships.

At our last in-person meeting, Dr. Sophia Richman, a psychologist who was a hidden child in Poland during the Holocaust, spoke to us. Most remarkable was the resonance of her experience for some of the Turkish Muslim women who were present that night, especially one woman who had only recently fled Turkey to avoid persecution by the Erdogan government. All of us were deeply moved to hear Sophia’s personal experiences that followed from a government rooted in bigotry and hate. 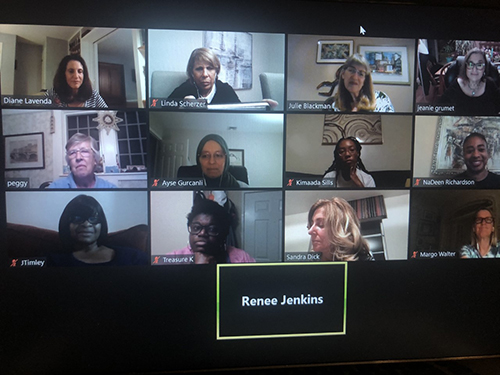 When the pandemic began, we cancelled our meetings until further notice – until we became more familiar with Zoom and reconvened on April 23. Our numbers have been smaller on Zoom. We had grown to about 25 members while we were still meeting in person; our last Zoom meeting had about 15, including a new group of African American women from the First Baptist Church of South Orange. We are hopeful that this expansion of our group will lead us in new and exciting directions.

At our most recent meeting, we discussed Rosh Hashanah. Federation sent all of our members small jars of honey and, in our opening prayer, we blessed the fruit of the tree and dipped slices of apple in the honey. We wished all of our members a sweet and healthy new year. We were able to share actual portions of our Ner Tamid High Holiday services and the members of our Interfaith Women’s Conversation heard Cantor Meredith Greenberg sing Psalm 122 in English, set to a gospel melody. We discussed the respectful inclusion of this melody as a sign of our openness to diversity and of our view that strength comes from acknowledging the beauty in other traditions.

As a part of this session, we discussed the story of the binding of Isaac, a centerpiece narrative of the Rosh Hashanah service. One of our Muslim members said that the Muslim New Year is also celebrated at this time and that they tell a variation of the same story. It was interesting to hear the similarities and the differences between this most fundamental story for all the religious groups represented in our conversation: Muslims, Christians, and Jews.

We are hoping to keep our doors open and would love to welcome Buddhists, Sikhs, Catholics, and any women for whom their religious identity is an important part of how they see the world. Most of all, our Interfaith Women’s Conversations make it clear that getting to know each other better is enriching and important. We are becoming friends of different faiths, and it is our kavanah (intention) to embody mutual respect and social justice through our ongoing shared conversations.