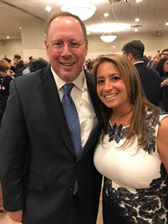 I met Rabbi Aaron Panken in November 2009. I was in the second year of the Wexner Heritage program in MetroWest NJ. The Heritage program is an intense deep dive into Jewish learning to enhance the leadership skills of lay leaders in the Jewish community.  This section of the curriculum would be Talmud, and Rabbi Panken was the expert who would be teaching us. Most of us had never engaged with Talmud before. And here was this young Reform rabbi standing before us as the expert. We looked at him with skepticism. What could a Reform rabbi know about Talmud? After all, didn’t the Reform Movement reject Talmud as binding halacha?

We were in for a learning adventure. Rabbi Panken, Aaron, really was an expert. He had a Ph.D. in Talmud and studied it for its wisdom, if not for its legal precedence. He opened our Wexner learning journey with the image of an ice cream sundae. As he explained, each layer in the Talmud adds depth and complexity, making it more fulsome and flavorful. This may seem like an odd choice, but it spoke to us lovers of ice cream, and new tasters of Talmud. The comparison was in how each ingredient fit together. You see, not only was Aaron an expert in Talmud, he also was trained as an electrical engineer. He was fascinated by the puzzle of how things connected and how they worked, and he shared that fascination with us through his teaching.

But Aaron shared something else with us as well. He was not simply the master teacher, he also became a friend. In Pirkei Avot, we are instructed to “Find yourself a teacher, make yourself a friend.” Aaron was both teacher and friend. He could share complex concepts with alacrity, and also talk with humor and joy about his kids and his hobbies, which included sailing and flying. He was a licensed pilot of many levels of expertise and the skies called to him. That was where he felt closest to God.

When the Wexner program was drawing to a close, I reached out to Aaron to discuss my desire to continue my learning with the hope that he might suggest a learning opportunity in New Jersey. Instead, he offered that I should learn at Hebrew Union College-Jewish Institute of Religion in New York, where he happened to be Dean of Admissions. He found a way for me to come in as a “special student” since I was not in a clergy or master’s track. I started the following August. For two and a half years I studied part time with up-and-coming Reform rabbis and cantors. We learned and debated and shared ideas. I felt like I was in my space.

But as life would have it, I had to take off some time to deal with other issues in my life. About a year later, it became clear to me that I needed to come back to HUC and enter an official program, so I reached out to Aaron again. Now he was president of the college. His responsibilities were global, yet he found time to speak with me. He directed me to one of his colleagues, a professor in the School of Education. I met with Dr. Lisa Grant in June of 2014. In August 2014, I began as a part-time student in the School of Education. I’m sure that without Aaron’s direction and support, this wouldn’t have been possible. I believe he saw something in me, and saw a way he could help put together the puzzle of my journey. Throughout the next three years at HUC-JIR, Aaron and I met sporadically to check in on how I was doing, discuss the broader sphere of his work and vision for the college, and talk about our kids who were about the same age.

When I think about my friend and teacher, Rabbi Aaron Panken, I truly believe he embodied the perfect blend of the qualities of the man of creation. He was Adam the first, endowed with the skill and the inspiration to conquer the world and master it. This is reflected in his analytic ability to assess a situation and create something new and awesome from it. This was how he saw his role as leader of HUC-JIR. He wanted to take the seminary to higher heights. At the same time, he exemplified the gifts of Adam the second, who was formed from the dust of the earth. This Adam is the one whom He instructs to take care of this planet and the creatures on it. This Adam is gentle and close, humble and kind, nurturing and caring. My friend Aaron epitomized both. Though he was confident and ambitious in what he sought to accomplish, he was never arrogant. He strove to guide and mentor generations of Reform leaders to be the caretakers of the Jewish people. This was the Aaron who touched me, and so many others. He had so much more to do. Though his life was cut short, his impact will be felt for years to come.

It is hard for me to process that he is no longer with us, and that we must speak of him in the past tense. The reality is just setting in. I hope that we all find the strength to look deep into our hearts and find the spaces in which we can emulate him. May his memory be for blessing. Zichrono livracha.

Lisa Lisser is a graduate of the JWI-GMW Wexner Heritage Program 2008. She currently serves as a co-chair of the Global Connections Shared Society (Kedma) Platform.