Isn’t that just a great thought with ice and snow bearing down on us?

It is for me, because I loved my summer camp. Mind you, I only went to my camp for a total of eight weeks over two years, but those eight weeks have impacted and informed the rest of my life.

I went to Camp Young Judaea, in Amherst, New Hampshire. It was the first time I had seen that many Jewish kids in one place. Camp was where I learned Hebrew folk songs, Birkat Hamazon and the power of an outdoor Friday night service. Camp was where I went to feel not alone in my Jewish-ness. It’s where I experienced the whole feeling-good-about-being-Jewish thing that happens at a Jewish summer camp.

Some things don’t change. Recently, Tracy Levine, the director of the Jewish Camp Enterprise, a program of The Partnership for Jewish Learning and Life here in Greater MetroWest, had a visit from a young man named Oliver Simon. Oliver had made a donation to One Happy Camper NJ as part of the celebration of his becoming a bar mitzvah, enclosing a letter that touched me so much. Oliver’s experience at his Jewish summer camp, Tel Noar (also in New Hampshire, CYJ used to play sports against Tel Noar, probably still does), sounds a lot like mine.

Oliver wrote to Tracy before he visited The Partnership:

“Jewish camp is important to me because it is so different from what I experience during the school year. At my school, there will probably only be 2 or 3 Bar Mitzvahs in my whole grade. Being Jewish is something I have to explain, even to my close friends, who have been to my house for Shabbat dinners, Hanukah candlelightings and meals in the sukkah. Someone recently asked me, “But you still believe in Jesus, right?” At camp I don’t have to explain any of this. We are just regular kids doing all of the stuff I do during the school year but we also happen to say prayers before and after meals, observe koshrut and celebrate Shabbat together each week. It all feels so normal yet Jewish.” 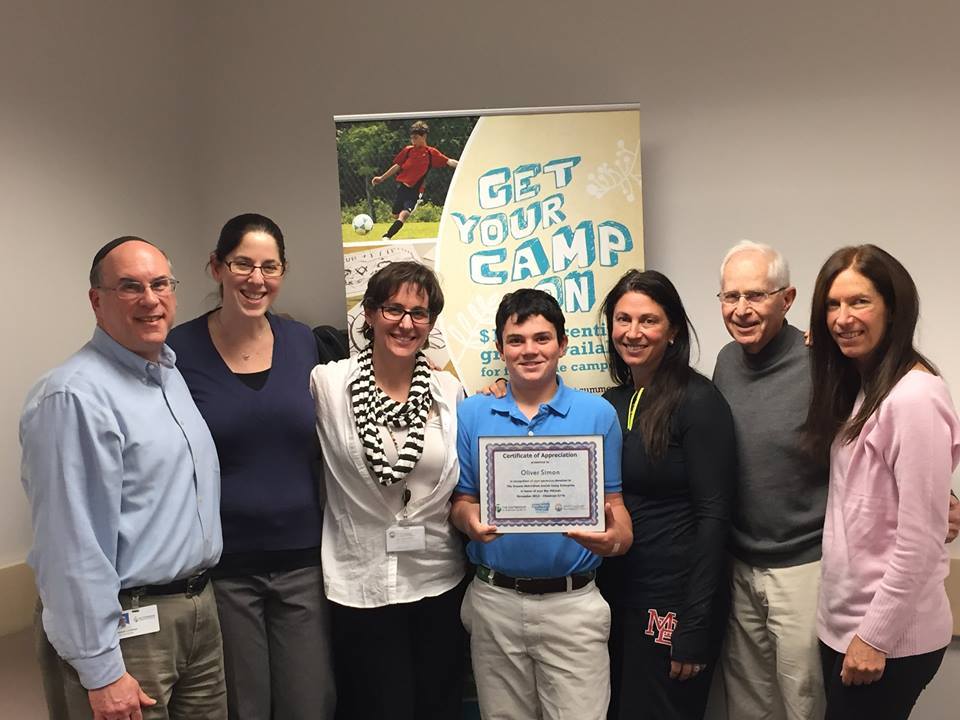 I hear you, Oliver! I felt exactly the same way. I was a happy camper at Camp Young Judaea, and Oliver is truly One Happy Camper, because his family participated in this program, which provides one-time incentive grants so families will take the plunge and try Jewish camping.

And how impressive is it that Oliver took the opportunity of his Bar Mitzvah to give back to this program – and is now getting more engaged locally in other Partnership programs, such as volunteering at the recent Mitzvot of Greater MetroWest fair? As a founding board member of The Partnership and as president of the Federation, I am so proud of the work of The Partnership in bringing Jewish learning to life – including all-important experiential learning, like overnight camp. And I’m really, really proud of Oliver.

I’ve been meaning to share this story with you for a while but in a way, I’m glad it took me this long to get to it, because it gives me the opportunity to recognize and pay tribute to Allen Bildner, z”l, who passed away Feb. 5. Allen also came from a very non-Jewish hometown and suffered anti-Semitic slurs and taunts as a boy growing up in Summit. He made it part of his life’s work to combat anti-Semitism and discrimination. Allen and his wife Joan, z”l, helped to endow the Jewish Camp Enterprise of Greater MetroWest through our Jewish Community Foundation. The Jewish Camp Enterprise provides One Happy Camper grants to kids like Oliver. And now Oliver is bringing it full circle.

Speaking of full circles and legacies, I’d be remiss if I didn’t point out that Allen and Joan’s son and daughter-in-law, Rob and Elisa Spungen Bildner, are the founding donors and co-chairs of the Jewish Camp Enterprise here in Greater MetroWest and the founders of the national Foundation for Jewish Camp. Allen and Joan have inspired their own family to have a huge impact locally and nationally on how many Jewish kids get to have the kinds of summers that Oliver and I have had.

This story is but one example of many that I get to see in our community, day after day, of the generosity of individuals making a huge difference in the lives of others in our large extended Jewish family.

You may not know this, but your Annual Campaign dollars also help fund One Happy Camper grants and support The Partnership. And the Jewish Community Foundation is there to help you create your legacy, following in the tradition of wonderful people like Allen and Joan Bildner. May their memories be for a blessing.

Here’s a picture of Oliver, his mom Melissa, and the team from The Partnership and the Jewish Community Foundation. Thanks Oliver, and here’s to many happy summers ahead for all of us!