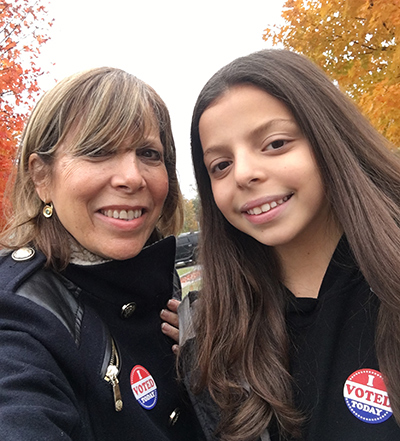 Exactly two weeks ago, as record numbers of voters went to the polls during midterm elections, I entered the voting booth for the eighth time since becoming an American citizen. It’s an act of citizenship that, for an immigrant, even one from a democracy like Canada, still brings me a keen sense of excitement. Walking into the middle school auditorium with my 12-year-old daughter, experiencing the rush of seeing my name on the voter rolls and being escorted to the voting booth, I felt again the pride and responsibility of being an American; confident that our democracy was strong and that each one of us had the power to make a difference.

In addition to proudly casting my vote, I’m also extremely proud of the work our Federation’s Community Relations Committee (CRC) did in the weeks leading up to Election Day. We helped educate and inform our community about the candidates, and we encouraged everyone to vote. In August, we created a “New Year, New Voter” video, aimed at helping Greater MetroWest college students register to vote, either in their home districts or where they attend school.

In October, we held community forums with the candidates from two hotly contested races in NJ’s 7th and 11th congressional districts, as well as the senatorial candidates. More than 800 people turned out on three separate night. We asked candidates Mikie Sherrill and Jay Webber about their positions on issues of deep importance to the Jewish community: responding to rising anti-Semitism, securing our Jewish institutions and synagogues, proceeding with Iran now that President Trump has backed out of the Iran deal, invigorating an Israeli-Palestinian peace process; and on the domestic front, ensuring strong support for our community’s most vulnerable and ending the scourge of school shootings with responsible gun control legislation, among many other topics.

We asked Tom Malinowski why, during his tenure at Human Rights Watch, Israel was subjected to criticism and condemnation out of all proportion to what was happening on the ground (not to mention, why human rights abuses were being ignored in other parts of the region). We asked Leonard Lance to clarify his position on abortion and Planned Parenthood.

While these forums were important in terms of educating voters, they also served as a vehicle for us as Jewish Federation leaders and professional staff to forge relationships with the candidates, especially those who were running for the first time. The large numbers of people who turned out to these forums illustrated to the candidates the degree to which our Jewish community cares about the issues and is engaged with the political process.

Relationships matter in Washington and on the local level, and we at CRC, as the government affairs arm of Federation, work hard to sustain and enhance those relationships by actively participating in the political process. We lobby our legislators. We help educate them and their staffs. We tweet, we post, and we make the case for why, with anti-Semitism on the rise, we need additional dollars to secure our buildings. Why, as a Jewish people who faced borders that were closed to us in the 1940s, it’s a Jewish imperative to “welcome the stranger” and bring about responsible immigration reform. And why, as the Talmud tells us, we cannot stand idly by when blood is shed, when the hungry need to eat, or when our community’s elderly and disabled need proper health care.

Next February, the CRC will take its second leadership mission to Washington, D.C. During this two-day lobbying trip, we’ll meet with our newly-elected Members of Congress Mikie Sherrill and Tom Malinowski, as well as those who’ve been re-elected (Josh Gottheimer, Donald Payne Jr., Bonnie Watson Coleman, as well as Senators Menendez and Booker) to lobby on issues of critical concern to our community. We’ll also meet with Israeli embassy representatives and thought leaders from the Washington Institute to discuss the current political and security situation in Israel and the region.

We will deepen our relationships with our elected leaders to make sure they are working for the needs of the Jewish community of Greater MetroWest.

If you care about the state of politics in our country and want to help us make a difference by lobbying on public policy matters of interest to our community, we invite you to join us. Those who are interested in being part of our delegation to the AIPAC Policy Conference on March 24-26 and who have high-school-aged children who may be eligible for subsidized registration fees should also get in touch with us.

There are many opportunities to get involved with us around issues – both domestic and international – that you care about. The midterm elections are over. The new Congress begins work in January. There is no better time than now to join us.