It was on the train home from Washington last Wednesday, at the end of a two-day Jewish Federation mission to our nation’s capital, when the call came in from the White House.

“This is Jason Greenblatt’s office,” said the caller on the other end. (Greenblatt is President Trump’s International Envoy, part of the team led by Jared Kushner responsible for crafting a new peace initiative between Israel and the Palestinians.) “Mr. Greenblatt hopes you now understand why he was forced to cancel the meeting with your delegation. We’d like to reschedule for next week.”

The call was a coda to one of the most historic days in Trump’s presidency. For earlier that day, as the world would learn, the President would announce that the U.S. recognized Jerusalem as Israel’s capital and would move the embassy there from Tel Aviv. Greenblatt, of course, was integrally involved in crafting the policy and told us one day earlier that he’d be unable to host us at the White House, a meeting that had been planned weeks in advance. 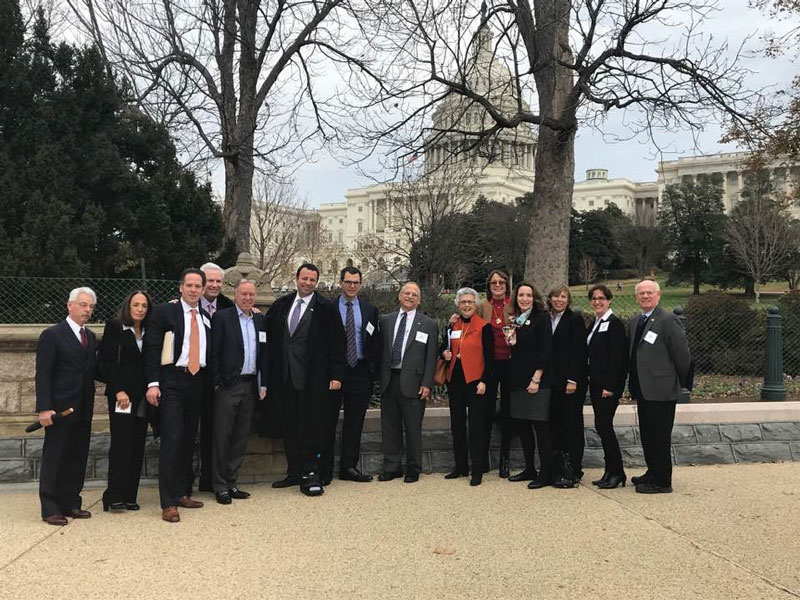 Despite our disappointment, it was an auspicious time to be in the nation’s capital with a Federation leadership delegation led by Steve Klinghoffer. On Wednesday, we watched the President’s announcement live-streamed with Israel’s Deputy Ambassador Reuven Azar, a former diplomat at the embassy in Jordan, who told the group that while Arab states in the region may have a difficult time accepting the President’s decision, many of these same countries, former enemies of Israel, are now looking to the Jewish State as a potential partner in the fight against Islamic extremism.

Earlier that day we met with Ambassador Dennis Ross, a Mideast negotiator under three former presidents, who agreed that Israel’s place in the region was changing in ways that were unimaginable just ten years earlier. Nevertheless, he said, when it comes to the issue of Israel-Palestinian reconciliation, the Palestinians need to feel that diplomacy is working for both sides in order for the U.S. to be seen as an honest broker.

“President Trump wants to do what no one else has done, which is to achieve the ultimate deal between Israel and the Palestinians,” said Ross. “In this, he’s not alone. It was the goal of every U.S. president to solve the problems in the holy land. But this is not a rational issue. It must be handled with great care.”

Thus began day two of our inaugural mission to Washington, a day in which we focused on Israel and international issues of concern to our Jewish community. The mission’s itinerary had been planned weeks in advance and included a visit to the CNN Washington bureau where Bureau Chief Sam Feist, a 26-year veteran of the network, talked about the importance of maintaining the highest standards of journalism during a time when journalists are under attack. David Frum, a senior editor at The Atlantic, shared that view.

But the real work for this group happened the day before, when our 16-person delegation headed to Capitol Hill for meetings with our two senators and members of Congress.  On this day, history was being made too, as a tax reform bill which had just cleared the Senate, was now in a conference committee, where leaders of the House and Senate were working to hammer out differences and send a bill to the White House.

After meeting with our Jewish Federation representatives at the JFNA office in Washington and learning how the elimination of charitable tax deductions could lead to a serious drop in charitable giving, we explained to our elected officials the effects this would have on the services we provide to our community’s most vulnerable — the elderly, the disabled and their families, and Holocaust survivors. (Our entire congressional delegation, by the way, voted against the tax reform bill.)

We thanked each of our members for voting in favor of an increase of $25 million for the federal Non-Profit Security Grant, bringing potential funding to $50 million. (“We need to take care of your institutions,” said Senator Robert Menendez.)  Then we reminded them of the importance of preserving Medicaid and Medicare and urged them to vote in favor of the Taylor Force Act, which denies U.S. funding to the Palestinian Authority until it stops paying stipends to the families of terrorists.

On policy issues, Senator Menendez, a fierce critic of the Iran deal, pointed to Iran as a continuing challenge to the global community, violating conditions of the deal and serving as the biggest sponsor of state terrorism. For his part, Senator Cory Booker criticized the Trump administration, accusing it of retreating in the fight against terrorism “at a time when we desperately need leadership.”

And we listened to Representatives Josh Gottheimer, Leonard Lance, Donald Payne, Jr., and staff for Rodney Frelinghuysen and Bonnie Watson Coleman, talk about how the tax bill will affect the people of New Jersey with the highest property taxes in the nation. They also talked about how angry partisanship in Washington can only be solved with caucuses like the “Problem Solvers” group, co-chaired by Gottheimer, which brings equal numbers of Democrats and Republicans together to work side by side on the critical issues of the day.

Advocacy matters, said JFNA’s Senior Vice President for Public Policy William Daroff, and so does relationship-building. Given the issues at stake, there was no better time to be in Washington than last week. The fact that so many officials made it a priority to meet with us says a great deal about the feelings they have for our Jewish community, and the respect they have for constituents who take time out of their busy schedules to lobby their elected officials.  I’m grateful to the 15 people who traveled with me to Washington and especially, to Steve Klinghoffer, for his guidance and experience in helping me pull together this mission.

Like most of us who were there, I am not a regular visitor to Washington. As we exited the Capitol Visitors Center and gazed at the Capitol with all its history and majesty, I stood in awe. We live in turbulent times and, because of that, I took an extra moment to cherish the values that the Capitol building evokes and the message of liberty and justice that it sends to the rest of the world. By being there, by exercising our rights and responsibilities as American citizens, our CRC-led delegation helped to affirm that.