It is Sunday night, and as I crawl into bed, I am easily drawn to reflecting on what we did over the past few days. There were soccer and lacrosse games, band practices, plans with friends, a birthday party, and the ending of Passover and thankfully eating some bread and then turning my kitchen back.

But combined with all those regular, normal, mundane, springtime family weekend activities was a barrage of texts and emails to go through in response to an anti-Semitic cartoon in The New York Times, swastikas drawn on a desk at a local middle school, a teenager who had pennies thrown at her feet because she is Jewish, and of course, the shooting at a Chabad in Poway, California. The normal melded together with the insanely abnormal that has sadly become routine for me. 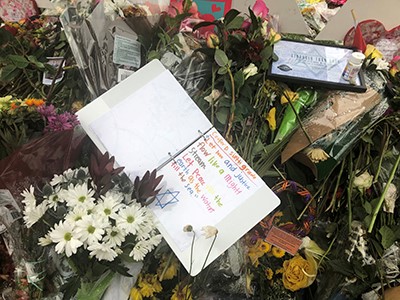 This is 2019, and in the past six months the world has witnessed shootings in synagogues, mosques and churches. There is a massive rise in anti-Semitism, racism, and all different kinds of bigotry. Hate crime rates are soaring. Yet our daily lives continue to plug forward and while we may pause, stop, think, and even post about it – we mostly continue with whatever our plans were that day.

When my family first heard about the shooting at a synagogue north of San Diego on Saturday, we were anxiously watching the clock, waiting for our first tastes of chumetz in over a week. For my children, this is not an easy week. We live in a very secular world, and for my boys keeping Passover has always been a struggle. They go to school every day with their matzo sandwiches and longingly stare at their friends who aren’t keeping the holiday – I know, they’ve repeatedly told me how hard it is. My husband and I talk, okay argue, with them about this a great deal, explaining that we believe taking a pause in our daily routine for one week to recall the coming forth from slavery is an extremely important tradition for us as parents to impart to them. For one week, each time they eat a meal or have a snack, they are reminded of their heritage.

How ironic that as the hours of Passover dwindled down, a real-life lesson on freedom was placed in front of us. And we were forced to stop again – stop the craziness of our weekend; stop the joy that they were about to gain from having pizza and pasta; and we stopped believing that we live in a world that is truly free. And for a bit of time, we did stop. We watched the news, we searched the media outlets online for more information, and we spoke about how horribly sad it is that a 19-year-old was so filled with hate that he ended a life and injured others because of it. Yet, for us, it was just a momentary stop. And my guess is that for most it was a simple pause, if that; not even a stop.

Now more than ever, it is so important that we stop – not just pause, but truly stop and commemorate this day. I know and understand how busy and crazy our lives are. On Wednesday night my family has many different activities we’re supposed to attend, but instead we’re going to go on a full stop. We are going to miss all that we have scheduled and attend our Jewish Federation of Greater MetroWest’s Annual Yom HaShoah Commemoration at Kean University. I invite all of you in the community to join with us that evening for what is truly going to be a most memorable night.

And if you are unable to join me that night in honor of all the victims of all the hate crimes that we have seen in the last few months, in honor of the millions murdered by the Nazis, in honor of our ancestors that were slaves in Egypt, and in honor of all those who have survived and beaten adversity – please do your own full stop in your activities to read about, learn about, speak about, and teach about the past so that we can have a little less hate in the future.