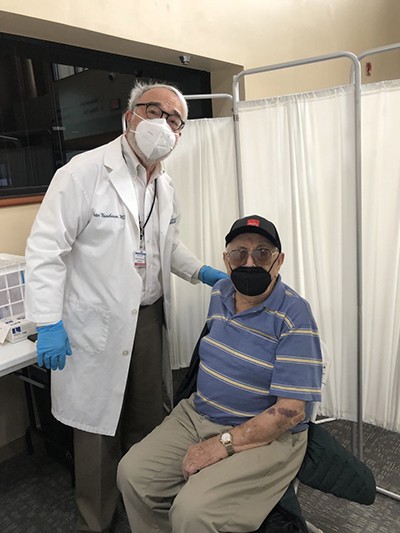 I recently heard a survivor say that they had lost their childhood to the Nazis and the last year of their lives to the pandemic. It was all we needed to hear to help these survivors not lose any more time.

On the morning of March 17 – St. Patrick’s Day, so maybe there was some luck of the Irish involved – a remarkable cross collaboration of our Jewish Federation, the JCC MetroWest, Jewish Family Services of both MetroWest and Central, Essex County, St. Barnabas Hospital, and Governor Murphy worked together to vaccinate more than 40 Holocaust survivors at a special mobile vaccination site at the JCC MetroWest in West Orange.

It was an emotional morning, as many survivors came in with tears of joy in their eyes – some of them outside their homes for the first time.

As I watched this remarkable effort unfold, I was struck by the poignancy. These survivors have told the most unimaginable stories of their survival during the Shoah, often overcoming what seemed like insurmountable odds. The stories vary widely, but in every one of them, someone, somewhere, somehow – and often multiple people – helped them to survive.

As a child, my family was close friends with a few families who were fortunate enough to have been on the now famous, Schindler’s List. By the time I chose to devote my education and professional life to studying and teaching about the Holocaust, Oskar Schindler had become synonymous with the word savior. What I ultimately came to understand is that there were Oskar Schindlers – otherwise known as Righteous Rescuers – all across Europe at the time.

Some were Christians, some were Muslims, some were Jews that were helping other Jews, even as their own lives were at risk. And shockingly, some were Nazis, that found it in them to help some, even while destroying others. A big part of our mission at the Holocaust Council is to continue to tell these stories for generations to come, to pass them on through education, and to emphasize how important it is to be a helper, to be an upstander, to do what we know is right and necessary to help others survivor.

We have all witnessed the struggle to survive during this global pandemic, and we have watched as so many across the world to put their own lives on the line to save others. Doctors, nurses, and other front-line workers became the new righteous rescuers, while most of us could only look on with admiration and gratitude.

Now, with the distribution and delivery of vaccines, there arose a new way for us to really help. Almost immediately when the vaccine rollout began, my colleagues and I at Federation were inundated with calls asking us to ensure that all Holocaust survivors in our community were able to get vaccinated. We reached out to our colleagues at Jewish Federations of NJ to see what we could possibly do to help. So began the task of contacting government officials to secure the vaccines for this at-risk group. As soon as over 75 age group was added to the vaccination list, they set aside vaccines for the survivors.

We spent hours making daily calls to the survivors on our list and collaborated with colleagues at JFS MetroWest and JFS Central to ensure that all survivors that we are aware of across the area were accounted for and were able to get the vaccines designated specifically for them.

It has been such a privilege to help these incredible survivors survive once more. We are so grateful to everyone involved in helping them get vaccinated and enabling them to safely celebrate holidays and mitzvahs with family and friends soon.