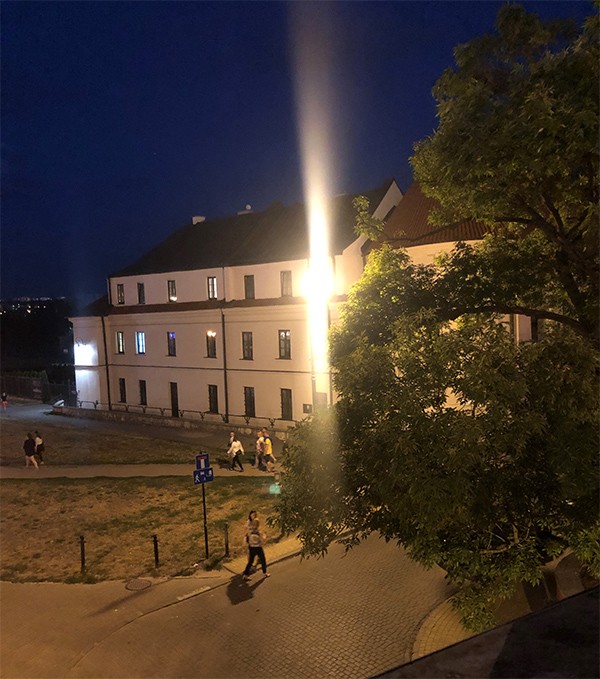 I’ve spoken and written often about the so-called birthright of a child, grandchild, or even great-grandchild of a Holocaust survivor. In many cases, it’s ingrained upon these subsequent generations to continue to pave a path of remembrance, recollection, and education.

It’s a birthright that I don’t possess.

My grandparents, and even some of my great-grandparents, were born in the United States. And despite my education, knowledge, and clear connection to the Holocaust, I sometimes felt unworthy of the work I do. It’s taken me a while, but I’ve finally made peace with that. I have my own family history, heritage, and strong Jewish roots in Europe that someday I hope to explore more deeply.

But for now, it’s Holocaust-era Europe – other families’ stories – that are at the forefront of my work, research, and trips to Europe. Yet on my recent trip to Eastern Europe with 26 educators from New Jersey, for the first time I had my own connection – and it was magical.

I knew my husband Ian’s grandparents left Lublin, Poland some time during the early months of 1939 and settled in La Paz, Bolivia. They lived there with their son, my husband’s beloved Uncle Bernie, until after the war when they were able to come to the U.S., where shortly after my father-in-law was born.

I never had the pleasure of meeting my husband’s grandfather, but I met his grandmother before she passed. I asked her questions but was unable to learn much about their life in Poland or about the fate of their family members. There isn’t anyone that really has any answers.

When, a few months ago, I found out that I our trip would include a visit to Lublin, I was so excited. I couldn’t believe that, after 75 years, I would be the first one in my husband’s family to be in Lublin again. Yet I was sad that I didn’t have an old piece of paper scribbled with an address to look up.

In Lublin I learned the story of the Jews there. At one point, it was the epicenter of Jewish life in Poland and, prior to the Shoah, the population of the city was one-third Jewish. Lublin has a gorgeous, intact old quarter. What it does not have, is an old Jewish district. At the start of the war, the city had three major Jewish districts. The largest of these was completely demolished by the Germans after the liquidation of the Ghetto, and its inhabitants were sent to Belzsec to be slaughtered. Had I had an old address to find, it would have likely been impossible to find it.

The visit to the Jewish Quarter, unlike the one a few days earlier in Krakow, was very brief – not because there wasn’t so much to be said about the past but because there is nothing left. Standing in the middle of what was once a vibrant, large Jewish community, I was so taken by the emptiness. All that marks the area is one streetlamp that glows with an eternal flame in remembrance of all that was lost.

After an emotionally draining visit to the Concentration Camp of Majdanek, we returned to Lublin for the afternoon and evening. There was a festival throughout the city, with street performers from all over Europe. The festival itself has a Jewish connection, as it began in remembrance of Isaac Bashevis Singer’s story, “The Magician of Lublin.” It was a gorgeous evening and it was truly remarkable to experience the vibrancy of a city that was plagued by such a horrid past – which is still honoring its Jewish past.

As we drove out the next morning, I didn’t have the same feeling of apprehension as I had on our approach. Instead I felt somewhat comforted in knowing more about what happened to the Jewish population of Lublin and seeing the beautiful city today with its commemoration to its once vast Jewish community.

I also felt inspired to do more, learn more, and search more about mine and Ian’s families’ pasts – knowing how important it will someday be to our children. I hope to return to Lublin with my family someday, and to branch into my side of the families’ past. What do you think mom – Russia 2020?!

For the time being, though, I will continue to plunge into other families’ stories. I am currently gearing up for our Holocaust Council’s upcoming Keep Talking workshop on August 12, which will help second and third generation survivors share their parents’ and grandparents’ stories. I hope you’ll join me!