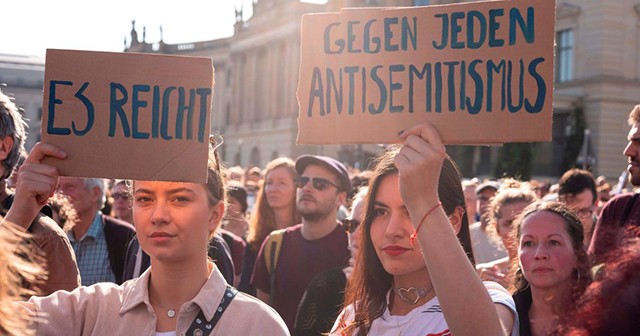 In July 2018 I spent my first Shabbat in Berlin. Although I had been to Germany several times before, I had not been fortunate enough to be in a synagogue for a Shabbat service. The experience was overpowering, and I left services that evening feeling incredibly proud to be Jewish, to be a Holocaust educator, and to have had the privilege of celebrating freely and openly with Jews and non-Jews in modern day Germany.

Over the past year, I’ve thought a great deal about that night each time tragedy has struck the Jewish community – in Pittsburgh and Poway. And each time it has struck religious institutions – in New Zealand and Sri Lanka. The feeling of pride that I had that evening in Berlin, quickly diminishes each time the news flashes another attack on religious freedom.

As I heard the news from Halle, Germany at break fast at the conclusion of Yom Kippur, my heart sank. This was yet another painful, gut-wrenching, and staunch reminder that no matter how strong the laws are against Holocaust denial and hatred – for we know they are the strongest in Germany – we’re facing a period of anti-Semitism that we have not seen since the Shoah.

I hope you will take the time to reread the blog I wrote after my Shabbat in Berlin and try to sense the happiness I felt praying at a synagogue in the heart of what was Nazi Germany. And together, I hope that in the coming months, we can raise awareness to this rise in hatred and do our best to put a stop to it.