Congregation Ahavas Sholom welcomes all to our diverse, hamish community. We are Newark's oldest operating synagogue. The service is Conservative and egalitarian. During COVID 19 restrictions, we invite all to our Zoom Shabbat morning services, from 10;00 a.m. to 11:30. For the link to the free services, please telephone Jeffrey Haveson, at 973.207.3095.

The 115-year old congregation draws its worshipers from Newark and suburban towns including Morristown, Warren, Monroe, Montclair, West Orange, Livingston and Springfield. Some are people who have membership in other synagogues, some are currently unaffiliated, and some are new to the area.

The congregation is committed to tikkun olam. It has raised more than $1 million to build two playgrounds for inner-city Newark schools and is actively pursuing its third such project. The congregation also donated a building lot for Habitat for Humanity's interdenominational "Abraham House." It has adopted the Jewish community in the village of Namutumba, Uganda.

The synagogue is on the the national and state registries of historic sites. Its magnificent mahogany ark is the oldest in New Jersey and one of the oldest in the country, having been built in the 1870's for a grand, midtown New York synagogue. The congregation houses the Jewish Museum of New Jersey, with its own religious, artistic and cultural programming.

The rabbi of fifteen years is Simon Rosenbach, and the president/chief executive is Eric Freedman. 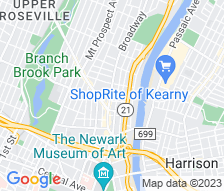