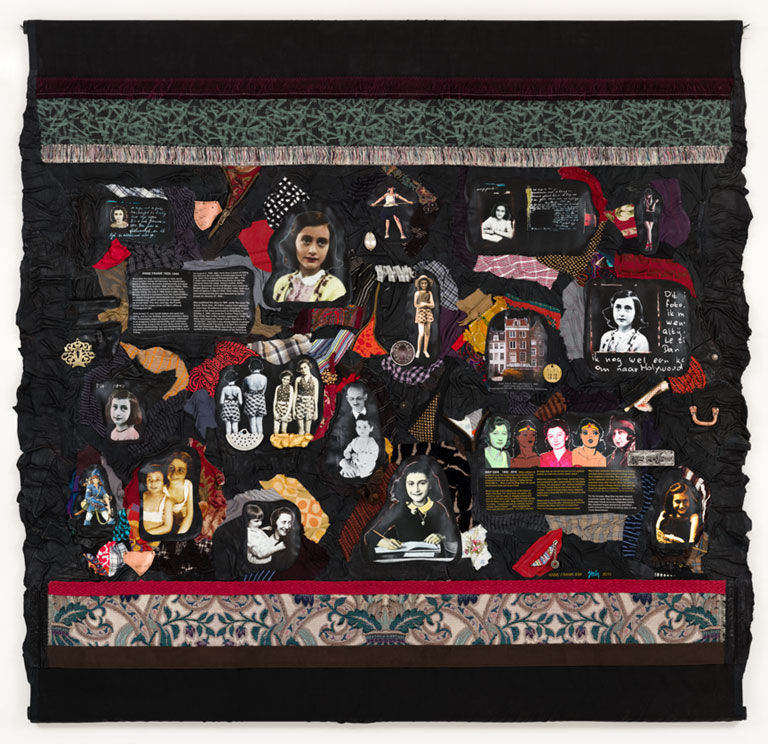 It couldn’t be more timely, given all the headlines, for Jewish Federation of Greater MetroWest NJ to be showing the “Fierce Females” exhibit. It’s part of an installation conceived and created by New York City artist and educator, Linda Stein. “Holocaust Heroes: Fierce Females” consists of beautifully wrought 21st century tapestries, shadow boxes, “armor,” and much more, that tell the story of the crucial part women played in the Resistance, armed and otherwise, during the Holocaust. It is part of the Holocaust Council of Greater MetroWest’s signature exhibit, From Memory to History: Faces and Voices of the Holocaust. The theme this year is Resistance.

Most don’t think of young Jewish women fighting and leading others to victory, but that’s precisely what many women, including Zivia Lubetkin, Vitka Kempner, and Hannah Senesh, did. Others, such as Anne Frank and Ruth Gruber, fought the war with pens and cameras. Some, such as Vladka Meed, were couriers, moving in and out of ghettos to acquire weapons and share vital information with other resistance groups. Some of the women were espionage agents or worked with the French Resistance to rescue downed Allied airmen and get them safely back to their units.

This exhibit depicts real women, most of whom were quite ordinary before the war, but became extraordinary models of courage and resilience. These fierce females were determined to stand up for themselves as human beings. They did not allow themselves to be easily cowed by male predators, even Nazis armed with guns and daggers.

Countless women in ghettoes, concentration camps, and even in partisan groups were sexually victimized during the Holocaust and most never spoke about it out of shame and fear of being shunned. Some conceded to sexual abuse only to save their lives or the lives of their loved ones. These were fierce females in every sense and we have much to learn from them.

“Holocaust Heroes: Fierce Females,” along with From Memory to History will be on exhibit through May 3 at the Alex Aidekman Family Jewish Community Campus, 901 Route 10,  Whippany, NJ. There is no charge and all are welcome, during regular business hours and occasional evenings and Sundays. To schedule a docent-led group tour, contact the Holocaust Council at holocaustcouncil@jfedgmw.org or (973) 929- 3194.